What groups of people around the world eat meat on a regular basis? What groups of people are vegetarian? Or how about countries? Which countries eat lots of meat and which countries have large populations of vegetarians? Before going to India, I always felt confident about where and why people did not eat meat, but India proved to be a major outlier that did not fit with my preconceived notions of vegetarianism. In India, I found a country with a thousand year old history of not eating meat independent of wealth or modernity. Why? How had this come to be? And why only India? 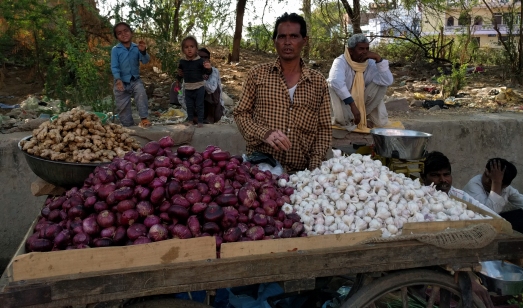 First some background on when, where, or why people may eat a lot of meat. One of the consequences of development and more wealth in a given country is more consumption in all categories. Because of this, environmentalists often struggle with the fear that the elimination of poverty will perversely hasten global environmental destruction because richer people consume so much more than the poor. And, in perfect sync with other consumption like cars, houses, or manufactured goods, research shows that meat consumption pretty much universally increases in proportion with rising incomes no matter what the country or culture is in question.

Indeed, peoples’ tendency to eat more meat as they become richer is so ingrained in world culture that it has a surprisingly large impact on the environment and some research says that about half of all greenhouse gas emissions around the world can be traced to meat production and that individual meat eaters produce twice as much greenhouse gas emissions as vegetarians living otherwise similar lifestyles. Indeed, when people get more money, they not only buy cars, but they buy meat. And lots of it: meat calories consumed per person has gone up by 1,442 percent in China, 831 percent in South Korea, and 258 percent in Brazil since 1960. Meanwhile, confirming that growth in meat consumption follows economic development, meat consumption in countries that were already pretty much developed by 1960 stayed relatively flat. In the US, consumption grew 30 percent between 1960 and today and in the UK, meat consumption only rose two percent since 1960.

Development begets meat eating because almost all countries around the world have traditional cuisines that have always included at least some meat and the historical limiting factor on the amount of meat being eaten was not preference but money. For example, before I arrived in India, I had just visited Cambodia and Vietnam. Both of these countries have been quite poor for a long time and have only recently experienced significant economic growth. I found that they perfectly followed the trend I discussed above of meat following development (meat consumption has grown about 270 percent in Vietnam since 1970). In fact, to the foreign observer, meat seemed to be ubiquitous at restaurants even though I knew rationally that most of Vietnam probably still could not afford to regularly eat it. Indeed, wealth and meat eating are so intricately tied that the idea that anyone would be able to eat at a restaurant (which implies wealth), but would not want to eat meat, was startling and strange to the owners of the restaurants where I ate in both Vietnam and Cambodia.

If development equals more meat and countries all around the world (including India) are developing more and more, what types of people or cultures are vegetarian? Although I have always known that some religious sects like Jains do not eat meat or knowingly ever kill any organism no matter how small, even in India there are not many Jains. Because of this, I have historically associated vegetarianism with environmental or health consciousness among the richest groups of people in the world. I think that for me vegetarianism has always been something I thought was either elitist or hippie. Some research even seems to bear out this idea of vegetarianism being a habit confined to the super developed. For example, while I wrote earlier that meat consumption rose slightly in developed countries between 1960 and today, consumption has actually declined or leveled out in these same countries since 2000. In Japan it is down eight percent, Spain is down 19 percent and the US, UK and Germany have all been flat in this time period. According to the FAO data I reviewed, all other declines in meat consumption, no matter the time period, were associated with severe economic crises.

If we discount the wealthy, who else is vegetarian? Enter India. Going completely against the pattern I found everywhere else in the world, meat consumption in India is historically decoupled from income, development, or education to a surprising degree. While from 1960 to the present, meat calories consumed per person in India did grow, it only grew 38 percent from a very low base and even today is lower than North Korea or Somalia. In fact, one source says that only Rwanda and Ethiopia, both countries mired in severe economic and political crises, consume less meat than India while the Food and Agricultural Organization finds Indian meat consumption to be the 8th lowest in the world. Why? Why would India break what otherwise seems to be a universal law of human development, consumption, and dietary preference?

India is an outlier because it is one of the very few modern countries in the world that has a historical tradition of vegetarianism with little connection to income or social status. From what I have been able to learn, this is because of a confluence of religious influences. Like a few other places around the world, including some philosophies in Ancient Greece (which also had traditions of vegetarianism), the indigenous religions of India emphasize the unity of life, a basic equivalence between the value of human beings and other animals, a cyclical nature of time, reincarnation, and nonviolence. Ideas of vegetarianism seem to often emerge naturally as a logical conclusion to these beliefs. For example, Buddhism, Sikhism, and Jainism (which used to be much more widespread than it is today) all have vegetarian traditions and Hinduism is replete with stories, passages, and traditions that espouse a vegetarian lifestyle. It is estimated that 30-40 percent of all Hindus (themselves 80 percent of the country) are vegetarians. Indeed, it is difficult to find an indigenous religion in India that does not have a tradition of vegetarianism or even directly address the idea of vegetarianism. Sufism, a mystical dimension of Islam with a long history of vegetarianism, even influences the 15 percent of the country that is Muslim to an extent not usually found among the traditionally meat eating Muslim populations in other countries. 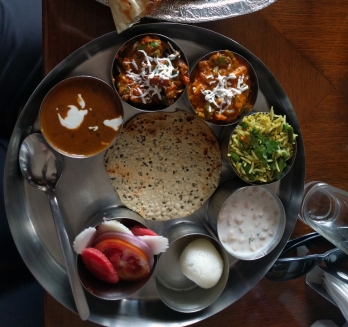 In fact, historical traditions of vegetarianism were fairly widespread throughout the Indian subcontinent, the Middle East, and the eastern Mediterranean prior to the advent of Christianity due to a variety of ancient philosophies whose ideas led them to advocate vegetarianism. Instead of Indian vegetarianism being a historical anomaly, it may be a modern example of what used to be a relatively common set of ideas regarding the killing and consumption of animals. Outside of India, these ideas were displaced by the spread of Abrahamic religions because these new religions may be seen to emphasize the dominance of humanity over animals and a linear view of time that emphasizes the idea that humanity as a whole has a fate that is held to be distinct from that of the rest of life. Meanwhile in East Asia, while it is true that vegetarianism was respected and promoted due to the influence of Buddhism (in contrast to the relative absence of a historical vegetarian ideal in the Christian and Muslim West), it was not widespread among the laity to the extent that it was and is in India. This may be because in the East, Buddhism blended and coexisted not with Hinduism as it did in India, but with folk religions and Confucianism that emphasized spiritual harmony, bodily balance, and unity with the spirits of ancestors. These philosophies tended to deemphasize the need to abstain completely from the consumption of meat. When these historical influences were coupled with contemporary western influence beginning in the 19th century, widespread vegetarianism as a way of life largely faded from East Asia despite its Buddhist roots.

Regardless of how or where vegetarianism in India emerged, I find it fascinating that it has so little historical connection to the “modern” vegetarianism that I thought essentially defined the practice before I went to India. Not only does India have a tradition that long predates the West’s foodie culture, but the country really takes their vegetarianism seriously. Laws mandate vegetarian or meat labeling on foods, vegetarian restaurants seem to far outnumber those serving meat, and even grocery stores selling meat are controversial. We often associate our modern “Whole Foods” culture with contemporary beliefs that owe their existence to our wealth, secularism, and relative lack of existential worries. In this context, India serves as an interesting reminder that many peoples and religions have long thought about the same things and rather than charting some new path when we worry today about animal welfare or advocate a vegetarian lifestyle, we are actually continuing a philosophical tradition that is thousands of years old.

One thought on “Vegetarianism in India”